END_OF_DOCUMENT_TOKEN_TO_BE_REPLACED

Title: Taken by Desire Series: Demonic Desires, Book 1 Author: Valerie Twombly Release Date: May 18, 2015 Genre: Paranormal Romance Greydon has two important missions: Find his brothers and rescue his people. His duty becomes complicated when he’s forced to beg a human to save his life. Aimee Jarvis always considered her bookstore a detour to bigger things. Little did she realize her next stop would be the intriguing world of a demon prince. Yet, she finds the dangerous Greydon alluring. While their attraction continues to burn, they both deny what their hearts already know. It will take the mystery of an ancient civilization and END_OF_DOCUMENT_TOKEN_TO_BE_REPLACED 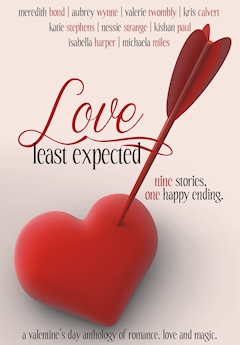 Love Least Expected Meet the Authors: Valerie Twombly     Any paranormal romance fans out there? Say hi to the lovely Ms. Valerie Twombly. She writes some pretty steamy stuff and you’re sure to find plenty of super-hot, supernatural men in her stories so definitely check her out! Here’s a little bit about Val: As a child, Valerie would often get into trouble for peeking at her mother’s favorite TV show, Dark Shadows. She can still hear her mother saying “It will give you nightmares.” She was right of course, but that did not stop Valerie from watching. As an adult, her love of the END_OF_DOCUMENT_TOKEN_TO_BE_REPLACED

Spanish Nights by Valerie Twombly PreOrder Blitz       Spanish Nights, A Jinn’s Seduction Release Date: September 24, 2014 Publisher: Valerie Twombly Paranormal Romance After a bitter divorce from her cheating husband, Makayla searches for her muse in the remote hills of Spain. When she flings open the door of her villa, she finds it in the form of intense blue eyes and a killer body attached to a thick Spanish accent. Armand has lost everything. His magic and his freedom are taken when an evil curse is placed on the Jinn, bounding him to earth. With only his immortality and ability for seduction, END_OF_DOCUMENT_TOKEN_TO_BE_REPLACED