Enter to Win a Print Copy of MIDNIGHT HEAT 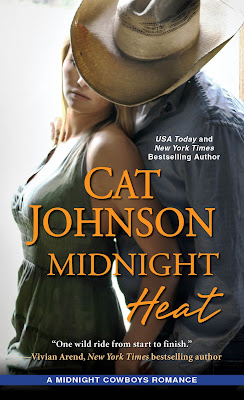 He needs to escape…
Justin Skaggs is on the road to anywhere—as long as it’s far from home—when fate throws a kindred spirit across his path.
She needs to get to Oklahoma…
Phoenix Montagno can’t believe her luck when she runs into the hottie from the bar. He’s the key to her getting everything she’s always wanted, but she can’t tell him that. Luckily he’s not interested in learning her story any more than he is in sharing his.
Both have secrets they don’t want to share…
It’s the perfect arrangement. No personal details. No talking at all. Just two strangers sharing the cab of a truck heading the direction they both need to go . . . until they decide to share a bed, too.

Justin ran the back of one hand across his forehead and let out a breath. It was a hot day. Then again, moving hay was a hot, dirty job no matter what time of year it was, but they were finally done with work for the day.

Tyler had already headed back to the barn. He’d gone to meet the blacksmith they’d called to come to check on the stallion that had a hoof abscess.

Justin’s boss, Rohn Lerner, was hoping if they pulled the stallion’s shoes and clipped his hooves shorter, the abscess might work its way down. Recovery was much faster and neater if the infection drained from the bottom of the hoof rather than burst through the top by the pastern.

While Tyler dealt with the lame horse and the blacksmith, Justin and Colton had been left to finish stacking the last of the bales in the hay shed to store them for winter use.

That was fine with Justin. He knew from experience that the Arabian stallion they’d been training could be temperamental, and he was a kicker. There was a good chance that

Tyler had gotten the worst end of this deal.

Justin glanced up at Colton’s comment. “You ain’t kidding.”

While wiping his hands on his jeans, Colton wandered closer. “So I’m gonna head home, shower, and then get dressed to go out. It’s two-for-one beer night at the Two-Step. You’re coming right?”

“That sounded like complaining to me. Besides, what do you care?”

Justin shouldn’t argue with him because Colt was right.

It had been two weeks since Justin’s near meltdown in the bar, and he wasn’t feeling much better. In fact, he was even more of an antisocial bastard, if that was possible.

“Yeah right.” Justin screwed up his mouth with doubt.

“You care because now that Ty is all bowed up with Janie every night, you got nobody to go out trolling for girls with.”

Colton wobbled his head from side to side. “Eh. I guess there is that, too.”

That elicited the first laugh from Justin all day. “At least you’re honest about it.”

Colton lifted one shoulder. “Anyway, you know where I’ll be if you change your mind. I’ll even pick you up so you don’t have to drive, if you want.”

“But?” Colton prompted Justin to continue when he let the sentence hang.

“I’ll let you know if I change my mind and decide to go.”

“A’ight. Good enough. I’m heading out. Maybe I’ll see you later.” It seemed, with that final comment, Colton was going to let the subject drop. Justin couldn’t be more relieved.

“Maybe,” Justin called after Colton, who’d already turned toward where the trucks were parked.

Colton didn’t bother turning around as he raised an arm to acknowledge he’d heard.

Justin reached for the handle of his own vehicle and swung the door open. As he settled in the driver’s seat, he saw dark clouds hanging low on the horizon. There’d be a storm rolling in tonight if he wasn’t mistaken.

Hopefully, it would just be a little rain. Thunder made his mother nervous. Tornadoes, even more so.

A bad storm meant she’d sit up all night, not sleeping a wink. She’d be exhausted in the morning. She always seemed worse when she didn’t sleep. He’d noticed that over the past couple of years.

With the anniversary of his brother’s death coming up next month, it was already like walking on eggshells at home as he tried not to do or say anything that might set off a major bout of depression.

Meanwhile, he had his own issues to deal with. His mood felt as dark as those clouds in the distance.

Maybe he should go out with Colton. Get drunk and get laid and knock himself out of this crappy mood. So far, sitting alone and stewing for the past couple of weeks hadn’t helped. His trying to be there to cheer up his mother hadn’t worked to make either of them feel better.

The wind began to kick up and he heard the sound of distant thunder rumble through the air. He sighed. He needed to get home.

His mother would need him.

The only question was, could he hold on long enough to support her while not cracking himself? He’d need to do something to keep sane and soon, before he wasn’t fit to be near anyone, including his mother.

He fired up the engine and spun the truck toward the road headed for home.

They didn’t live too far from the ranch, so it didn’t take long for Justin to reach home, or what had become his home again after he’d had to move out of his own place and back in with his mother. That had been shortly after his brother’s death, when he’d realized his mother couldn’t be alone.

Big fat drops of rain began to strike the glass of his windshield as Justin pulled into the house’s driveway. He realized they’d gotten that hay put up in the shed at Rohn’s place just in time. If they’d left the job until tomorrow, it would have been soaked.

Justin parked the truck behind his mother’s car in the drive, blocking her in. That was all right. She wouldn’t be going anywhere tonight. She rarely went anywhere during the day. She sure as hell wouldn’t be leaving the house on a stormy night.

He sprinted to the house, trying to avoid getting wet. Inside the front door, he shook the water off his hat and then hung it on the hook.

He walked through the kitchen, dark except for the waning light filtering through the windows. He noticed there wasn’t anything started for supper.

Continuing to the living room, he found her on the sofa in front of the television, wrapped in a blanket in spite of the warmth of the day.

It took her a second to look up. Long enough that he wondered if she’d heard him. Finally, she glanced at him and said, “Hi.”

As she turned her focus back to the television, Justin sat next to her. “What do you want for dinner?

“Nothing. I’m not hungry.” It was her usual response. A clap of thunder had her jumping. “There’s a storm coming.”

“Just a few storm clouds. It’ll pass.” He noticed for the first time what she was watching on television. The Weather Channel.

A banner that read Storm Alert in bright red text spanned the width of the screen. Leave it to the media to make an event out of anything, including a simple thunderstorm.

He drew in a breath and stood, knowing she’d sit there all night watching the live weather radar and worrying, and there was nothing he could do about it short of unplugging the TV.

“I’m gonna throw something together for dinner for myself.”

“I’m sorry. I can do it—” She flipped the blanket off and moved to get up.

Sometimes, on the better days, he saw her guilt when she realized he was pulling both his own weight and hers. That he’d work a full day at the ranch and then come home to cook, clean, and do laundry. On those days she’d try to make an effort to function normally.

“Stay. I got it. It’s fine.” He moved toward the kitchen, too hungry and not in the mood to watch her wander aimlessly around the kitchen, taking twice as long to do something as it would take him because she couldn’t focus her mind.

He’d defrost some of the chili he’d seen in the freezer. If he delivered a bowl to her where she sat, she’d eat at least some of it, just to make him happy. That would have to do for now.

The best he could do was get some food into her. Then he’d convince her to take one of the pills the doctor had prescribed for her after his brother’s death. The ones that calmed her and made her sleep.

They were out of refills on the prescription and the bottle was getting dangerously low, but she took them so infrequently, there were still enough left to get her through the next month, when she’d need them most. After that, he’d have to convince her to go to the doctor again and get more.

Hell, maybe he should be taking the meds, too. Though he preferred to self-medicate with the good old-fashioned, tried-and-true medicinal properties of booze.

Five minutes in the microwave and dinner was ready. 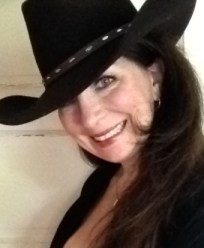 A New York Times and USA Today
bestselling author, Cat Johnson writes contemporary romance in genres including
military and western. Known for her unique marketing and research techniques,
she has sponsored pro bull riders, owns a collection of camouflage and western
footwear for book signings, and a fair number of her consultants wear combat or
cowboy boots for a living. For more visit CatJohnson.net
Website | Facebook | Twitter | Goodreads
Don’t Miss Any of the Midnight Cowboys