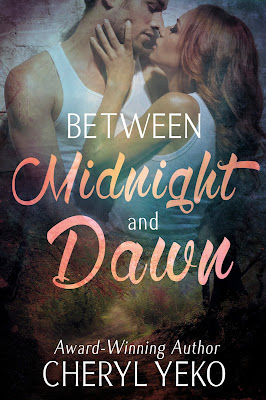 BETWEEN MIDNIGHT AND DAWN

Kyle Wade has spent over half his life seeking justice for his mother’s brutal murder at the hands of the serial killer known as C.H.K. His efforts lead him to Nicole Chambers, a woman he quickly develops strong feelings for.
Now he’s torn between keeping Nicole safe, or using her as bait to capture the monster stalking her.
BUY NOW
Amazon

Nicole paced nervously, waiting for Kyle to return. She’d thrown on her workout clothes; a black pair of Capris, a long purple T-shirt with large cut-out armholes, and a black sports bra that peeked out from underneath. She was covered practically from head to foot, so why did she get so nervous thinking about Kyle seeing her in the outfit?

Because he’ll be touching me, that’s why. And though not as daring as what a lot of the women wore at the club, it still showed far more skin than Nicole was used to, except when she was working out. Did this qualify?

This is a bad idea.

Her doorbell rang out.

She took a steadying breath. Too late to back out.

When she opened the door and Kyle saw her, his eyes lit with a smoldering fire. But all he said was, “Ready?” as he moved past her, greeting her dog, “Hey, Charlie.

Taking a moment to close the door, and calm her jittery nerves, she turned back to him. The desire she’d so clearly recognized in his heated stare, had lessened to a more neutral expression.

He nodded toward the living room, where she’d pushed the furniture out of the way, clearing a large spot in the middle. “You should have waited for me to help.”

Nicole rolled her eyes. “Please. I do vacuum, you know. The furniture doesn’t move itself.”

A slightly crooked smile curved Kyle’s lips as Charlie headed over to his dog bed for a nap. “Suppose not.”

Her stomach fluttered. He was too damn charming for his own good. How in the hell was she supposed to resist him? No men rule, remember. Gah! What a dumb rule. What had she been thinking?

Maybe that your taste in men is crap, and you needed a good long break after the last guy you dated almost killed you.

Kyle moved to the center of the room, looking all too fine in a pair of tight jeans that hugged his ass. He waved her over with two crooked fingers. Her cheeks flamed, hoping he hadn’t caught her checking him out. But by the smirk on his face, she figured he had.

“Now,” he said as she approached, his tone shifting to all business. “If someone tries to grab you, whatcha gonna do?”

He nodded. “That might work. But, let’s say he manages to get ahold of you. What then?”

She licked her dry lips, nerves rolling around in her stomach. “Is this a trick question?”

The smile that split his face stole her breath. Gone was the serious tenant-slash-police officer from her backyard cottage. The man who stood before her now was a total, flat out, hands-down, no-question-about-it, hottie. His sex appeal exploded into the room like an atomic bomb filling up every nook and cranny.

And in just a minute or so, he was going to put his hands on her.

Maybe this really wasn’t such a good idea—

Nicole screamed when she was suddenly grabbed and her back brought up against Kyle’s chest. One arm clamped around her waist, the other across her throat.

Her natural instinct was to struggle, but he had one leg wrapped around her shins, totally immobilizing her. The heat from Kyle’s body burned her up, and she wasn’t unaware of the rising bulge against the small of her back. Excitement tickled through her.

Charlie let out a little bark, but only lazily watched them. She scowled at him. Some guard dog!

Mouth pressed against her ear, Kyle murmured in a seductive drawl, “If I were the bad guy, sweetheart, your pretty little ass would be mine right now.” 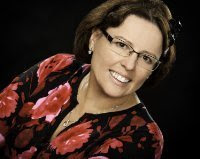 My writing career began in 2011, after my wonderful husband bought me a Kindle for Christmas and changed my world. I started reading romance novels, and fell in love with them. I decided to write one myself, and disappeared
into my room over a long Wisconsin winter and wrote my debut novel, PROTECTING ROSE. I submitted to a few publishing houses and was offered a contract with Soul Mate Publishing, which I quickly accepted.

PROTECTING ROSE went on to win the 2012 Gayle Wilson Award of Excellence in the romantic suspense category. Well, I was hooked.Today, I’m a multi-published, award-winning author, and live in Wisconsin with my husband Patrick. I love to read, play piano, and spend time with family and friends. I enjoy novels with fast-paced action and steamy romance, protective alpha men and strong heroines. I belong to several writing groups, including Romance Writers of America (RWA) and Sisters in Crime.

Please sign up for Cheryl’s Newsletter, with her two BFF’s, Char Chaffin and Callie Hutton.

http://www.thepowerof3cs.com/
Char and Cheryl also write together under the pen name, CiCi Cordelia, Writing From The Heart. Find us on Amazon: http://www.amazon.com/Cici-Cordelia/e/B01AJ5EM90
Cheryl is also an Acquisitions Editor for Soul Mate Publishing. As an Editor, she welcomes Romantic Suspense, Paranormal, Sci-Fi, Contemporary, and Erotica. You can reach her at Cheryl@SoulMatePublishing.com
Website | Facebook | Twitter | GoodReads

2016-05-19
Previous Post: My Last Love Story by Falguni Kothari
Next Post: DEEP DARK by Laura Griffin w/ prizepack giveaway @TastyBookTours @Laura_Griff
We use cookies to ensure that we give you the best experience on our website. If you continue to use this site we will assume that you are happy with it.OkNo