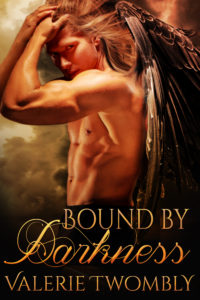 He mated to protect her. She used him for revenge. As their worlds collide, their feelings for each other grow. But, when his dark secret is revealed, it may be more than she can forgive.

Lyzander has done many distasteful things in his life. One in particular has haunted him for the past twenty years. Now, the little girl he sheltered from the ones who killed her family has become his savior. When she seeks to avenge the murder of her loved ones, he finds himself saving her all over again.

Kelana has an agenda, and if mating with the angel warrior Lyzander will bring her closer to completing her mission, then she will gladly take him to her bed. When her father discovers the abomination he created is still alive, he proves more powerful than she imagined and it will take everything at her disposal to survive.

Kelana had her succubus lust in full swing. It was so powerful, he saw it swirl into a life of its own. The guard had relaxed, and his full attention was on the woman in front of him. She leaned in and flirted. The demon responded by touching her cheek, and Lyzander’s fury boiled to the surface.

I fucking told you not to let him touch you. He didn’t wait for her to respond but stormed forward, calling forth his sword. Damn, I hope this works. Relief swept over him as the warmth of the blade handle slammed into his palm. Within seconds, he was upon them. Wielding his sword of death in one swing, the demon’s head left its body and hit the ground, rolling across the dirt and into the street.

2017-05-22
Previous Post: The Widow’s Keeper by Kishan Paul #ReleaseDay #asmsg
Next Post: Jane Doe by Kris Calvert #JaneDoeRelease #JaneDoeScarlett @KrisCalvert
We use cookies to ensure that we give you the best experience on our website. If you continue to use this site we will assume that you are happy with it.OkNo